We know it's hard to stay on top of every open position in your organization – how many candidates do you have at each stage, which roles are close to filled, and who's running an efficient process. The Open Positions reporting is designed to be scannable, so you know, at a glance, where you stand and who you need to follow up with.

Heads up: We break each group of these charts down by pipeline; if you have several custom pipelines with open positions, this can be a lengthy page.

This report shows you the most pertinent stats on each open position, presented in table form. Here, you'll see: Who created the position, its location, total days the position has been open, and the number of candidates at each stage of the pipeline.

Up in the right-hand corner of the report, you'll also have the option to export these details to a .csv. 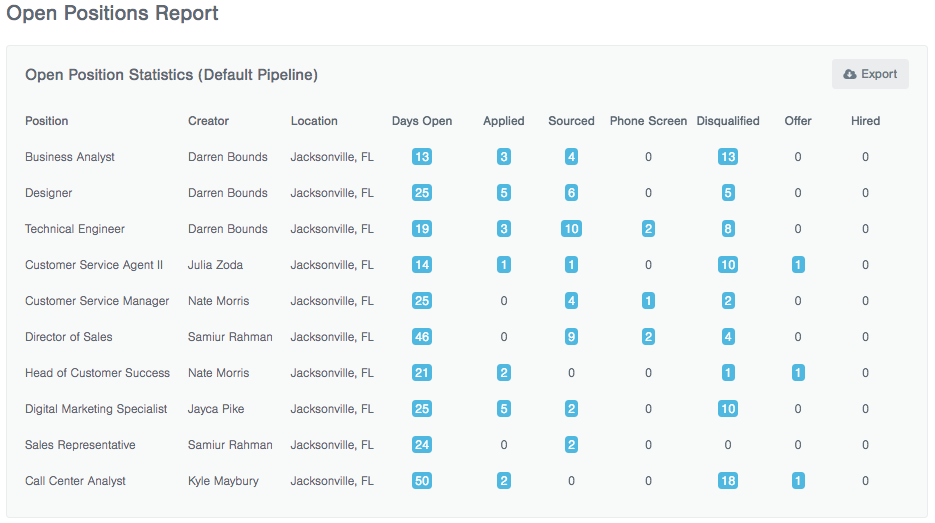 Here we'll compare who in your organization is creating the positions that are currently open by volume. You'll be able to scan this report quickly with some handy visual references in the pie chart and bars, as well as note the percentage of open positions each person has created.

This report tells you the average number of days that a position has been open by each position creator – in the example below, we can see Kyle's positions have been open for much longer than anyone else's.

What's going on? Checking back through the other reports on this page, we know he's got only one open position (Call Center Analyst), and he's currently got an offer out to a candidate for that role. After they've accepted, this would be a great role and process to analyze in the Pipeline Performance report to get a better idea of what may have caused the slowdown.

More often than not, you'll need to comply with laws surrounding EEOC/OFCCP … here are those crucial reports, already set up for you: